If this is your first time reading one of my detox post, this is my experience of week 2 of a 20 day raw detox.  You can find week 1 below.

This week started off really great, until it wasn’t…

I swear the weekend always tries to set me up for failure. Well, the start of week two was great!!!  Most days I was ready to get my day started with some type of exercise.  It’s usually hard for me to tell a difference in my energy level (except for week one…I was exhausted from all the traveling).

This week though, I’m not sure if I was just back to normal or if my energy levels had really increased.  Sunday, I felt really good.  Woke up and hit the pavement for a nice stroll to the store.

Once I got back home, I figured, I might as well complete my challenges (squat and 30 Day Abs).

The rest of the week was pretty much the same…was able to jump up and head out the door to run with BGR! Columbia on Monday, Tuesday and Thursday.

This week was mainly smoothies, oatmeal, salads (kale and not tuna pâté) and guacamole.  I know last week I said I was going to lay off the nuts, and I did for the most part.  Only two of my dishes were nut based this week; veggie burgers and not tuna pâté.   I made veggie burgers on Sunday from the Rawtarian recipe found here.  These burgers were the bomb, so you know, I just had to have them for dinner and then again for lunch.  I also made a not tuna pâté that was to die for.  This pâté really did taste like tuna; it was delicious.  Please click the link above for the not tuna pâté recipe.  If you happen to try any of these recipes, I would love to know if you liked them (leave me a comment).   This raw detox has really got me thinking about changing the way I eat (vegetarian on the horizon). 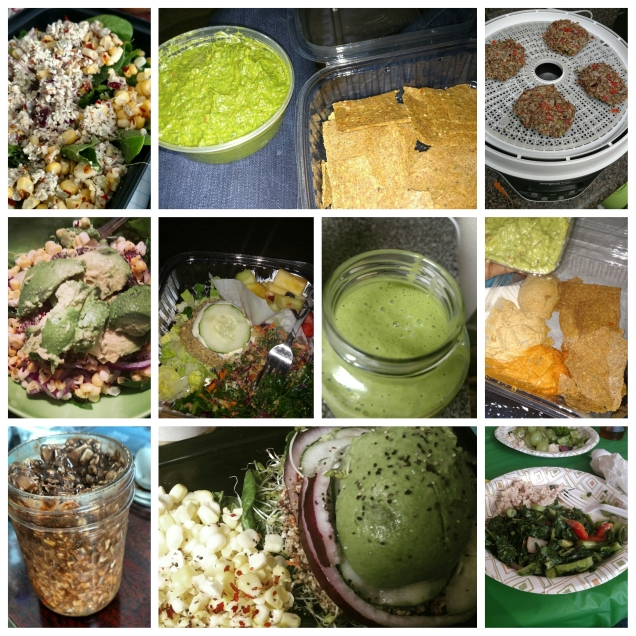 This weekend was the hardest by far. Friday, I headed down to Augusta to celebrate a friend’s birthday party at Van Gogh and Vino. Here I am again going to another paint and sip without any sipping. I really need to do better when deciding on my detox (lol joke, I always adapt accordingly). Even without any sipping, I still managed to have a great time among all the wine heads (okay, not really wine heads but most were sipping on the concoction that was made just for the party).   Let’s just say, a lot of folks walked out of that party feeling pretty good; Veronica included 🙂 .

This weekend was also Augusta Pride and we headed down to the festivities after the paint and sip party.  Once again, not being able to partake in any drinking or eating, I still had a great time.  How can you not enjoy Pride?  The energy and love in the air was euphoric.   That day was also the day that the Supreme Court announced that same-sex marriage is a constitutional right.   Hell yeah, even more reason to celebrate and being out and about in downtown Augusta at Pride was a great way to end the evening.  Party on Broad!!!!

My cousin came down on Saturday and joined Vee and I for the Pride parade and festivities at the Commons.  It was her first time coming down and I think she really enjoyed it.  Of course those two got hungry, so we ended up at the Pizza Joint (now I LOVE the big mike sandwich (don’t judge me 🙂 ) but of  course I couldn’t have any parts of it while on the raw detox (hence my struggle).

As you can see, I really struggled with the no drinking and eating cooked food this weekend but somehow managed to make it through.  The hardest was going out later Saturday evening with my girls.  I don’t get out often but when I do, I like to have a drink or two.  So that was a struggle in itself.  I still managed to have a good time and enjoyed the shows (some performances less than others…but man…the memories).

Afterwards, Bri and Vee ended up stopping at Waffle House.  Now both of them knew they were wrong for that, but I didn’t say anything.  I just sat quietly while I watched them eat their food.  Lucky for them I had given up eating at Waffle House, because I don’t like the fact that my dollars may “eventually end up funding anti-gay, anti-choice or other conservative causes“. When I know better, I do better!!

The highlight of my weekend was on Sunday.  Veronica and I headed out to the Greenway for a nice brisk walk before heading to Humanitree’s Dine on the Vine.

Dine on the Vine was a Vegan Dining Experience at the Humanitree House from 2:00 – 6:00 pm.  When we got there was already a long line and plenty of people already sitting down eating (I told Veronica we should have gotten there at 2 🙂 ).  The menu included cooked and raw vegan dishes inspired by African, Caribbean and Soul Food cuisine.  As you know, I was only interested in the raw dishes (looking forward to their next one, when I can sample more dishes).

They didn’t have much to choose from as far as raw food, but what I did have was well worth the 12 bucks in my opinion.  Veronica tried a bevvy of dishes but had no clue what she was eating LOL.  It would have been nice if each dish was labeled indicating what it was and where the dish was inspired from.  Despite the long line, limited seating and not knowing what you were eating, it was really worth my Sunday afternoon.  OMG!!!! If you are ever in the Augusta, GA area, please stop by this place.  The kale salad is out of this world.

I would really recommend going to their next Vine and Dine (just get there right at the start).  Better yet, it would be great if Humanitree had some type of priority seating for the people that paid in advance.  Or even better, maybe let those that paid in advance come in during the first hour and then open up for the general public who didn’t make reservations (by a cut-off date of course) or those paying at the door.  Just my two cents.

The struggle is real but it’s what you make of it that makes the difference.  I didn’t let my detox ruin any of my experience this weekend.  So just know, it can be done!!!

Are you doing any type of detox?  Are you struggling with eating and/or working out?  How do you overcome the struggle?

2 thoughts on “Raw Detox: Week 2: The Struggle Was Real”